Brick stacking puzzle games have been around since console gaming shot to popularity in the 90’s. Most gamers have played a column or brick stacker many times before, so to get our attention there needs to be some originality in the game – thats exactly what Tricky Towers manages to do. Throughout my time with tricky towers I experienced a carousel of emotions form joy to anger to triumph to frustration, but one thing was for sure it kept me wanting to go back.

The main thing that sets Tricky Towers apart form other games in the genre is it’s excellent use of physics. The aim of the game is to build a tower with different shaped bricks, how you place the bricks on top on one another has a huge effect on the outcome of your game. To help with this developers WeirdBeard Games have done an excellent job in making the movement of the bricks very precise. If you want to achieve success in the game you have to make the most of the physics system, which for me added a new depth of the game to learn that i really enjoyed. 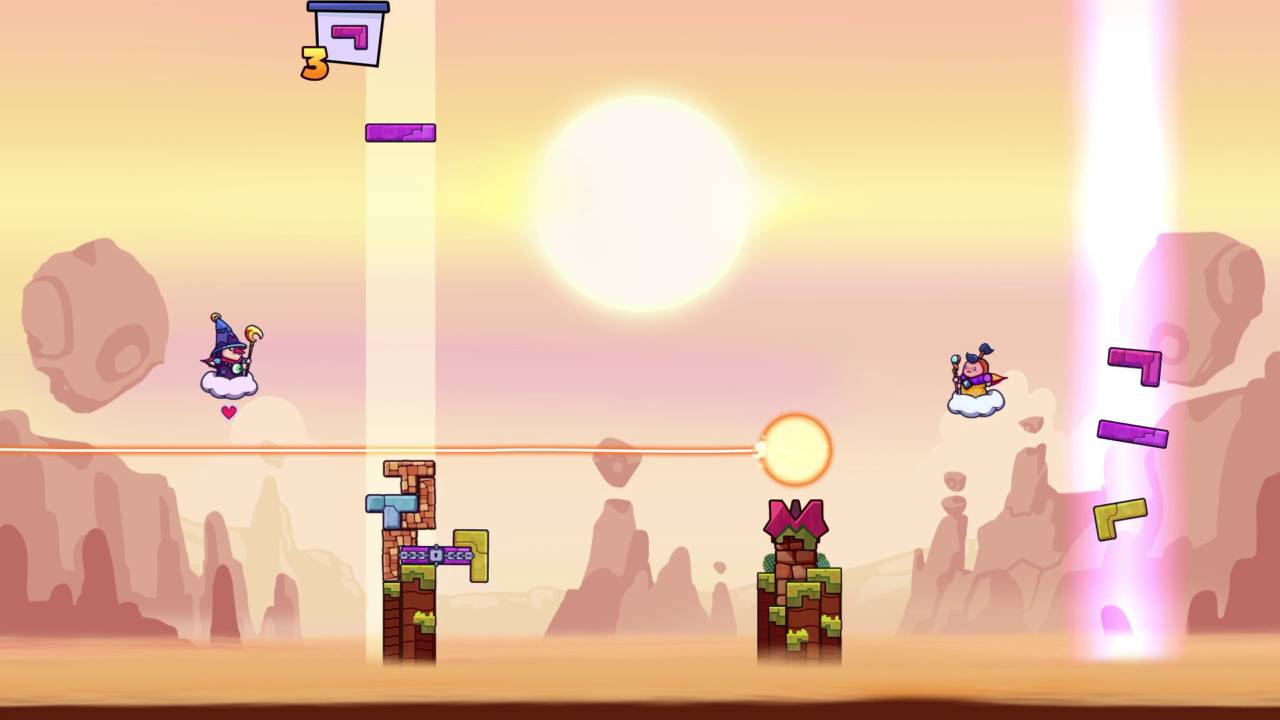 Tricky Towers offers players both a single player and a multiplayer experience. The single player campaign is built up of 50 puzzles, they are split into 3 categories: Puzzle trials, race trials and survival trials. The puzzle trials were clearly my favourite, they require you to stack the bricks in a jigsaw like manner to keep your tower under a target line (displayed as a laser). The thing I loved about these trials was if you fail (and trust me you will) you get to use the same bricks each time, it’s effectively trial and error approach but as the game progresses it require you to really think outside the box.

The race trial and the survival trial are similar, with the race trials you have to build a tower over a target line before the time expires; the survival trial requires you to build a tower using all the bricks provided but only allowing 2 brick to fall. I did enjoy both these modes but as the game stretched into it’s more difficult stages I felt it was creating some impossible to win situations. When playing against the cpu they use magic to make things more tricky for you (magic is also used in multiplayer but more on that later). I appreciate that the puzzles will naturally get harder as you progress, but combine the random order of the brinks and the relentless of magic the cpu is using I often felt that when I did clear a stage it was down to luck rather than skill. There is also an endless mode available, challenging you to build a tower using as many bricks as possible. While building your tower you have several obstacles to overcome, but by doing so you could earn yourself a place on the online leaderboard.

Now about that multiplayer, well this is where the game really came to life for me. Both online and local multiplayer are available, I played several hours of local and it’s a great couch battle to have with a friend. All 3 games modes from the single player campaign are available along with a difficulty option, with the special difficulty adding weather elements to overcome as well. The use of magic is brilliant in multiplayer, to be able to use magic you have to reach a target line, you then have the option of light magic, which aids you, or dark magic to create a hurdle for your opponent. Online matches are up to 4 players, when there are 4 of you on-screen battling it out is when the game is at it’s best.

4 player battles really are the best

I’m really enjoying the multiplayer in Tricky Towers and I will be for some time yet. The polished cartoony presentation of the game and pick-up-and-go gameplay make it a easy game to get into, but the physics make it a very hard one to master. The single player campaign will probably provide you with more frustration that the sense of a challenge, with you often relying on luck in the latter stages. If you are looking for a new challenging puzzler with excellent multiplayer elements then look not further that Tricky Towers.

What is… Curse of Annabelle