Mondays don’t have to be that bad, well, sometimes they can be, but on the bright side however, with a new week comes a new host of awesome indie games to delve into.

Inspired by classic Shoot ‘em up games, DOGOS looks to bring us frantic and fast-paced arcade style action. Players play the role of Desmond Pheonix, a highly skilled pilot in command of high tech ships, each equipped with unique hair-raising explosive weapons. DOGOS boasts 14 original open world levels for you to explore, the worlds were completely made in 3D, allowing you to achieve your goals anyway possible.

DOGOS will challenge your skills and reflexes, continuously pushing it’s limits with powerful bosses and every growing hordes of enemies.

Oceanhorn: Monster of Uncharted Seas was originally released last year on both mobile platforms and PC. The game was very well received by fans, often being compared to Zelda, which is never a bad thing.

Oceanhorn throws you into a visually striking 3D world, were captivating storytelling and action-adventure gameplay offer a brilliant experience. You play as a young boy, in his search for his missing father. You’ll have to explore the different islands of the uncharted seas to find clues of his whereabouts, solving puzzles and unveiling secrets along the way. As you may have guessed these islands aren’t always inhabited with friendly creatures, but have no fear, both your melee attacks and the ability to learn magic will help you keep the monsters at bay.

Awesomenauts originally released way back in 2012 for the previous generation of console. In 2014 Awesomenauts Assemble hit PS4 and PC and now the 2D MOBA is finally hitting Xbox One. The game throws players into 3v3 battles, where you can choose to play as one of the many Awesomenauts. As is the case in MOBA’s each awesomenauts has their own unique set of characteristics, abilities and stats, often requiring tight teamwork to come out victorious.

The games developers, Ronimo, are treating Xbox players to a free download of the Starstorm expansion back during the launch window (available until 12th September)

Jotun is a beautifully hand drawn adventure-exploration game set in Norse mythology. You play as Thora, a female viking warrior who suffered an inglorious death, and now must prove herself to the gods. As you explore the regions of Norse Purgatory you’ll uncover runes, allowing you to unleash the jotun, giant Norse elements. These giant Norse elements don’t come in peace, in-fact they offer some very challenging boss battles, where knowing how to use your huge two-handed axe is the only way you’ll prove yourself worthy to the gods. 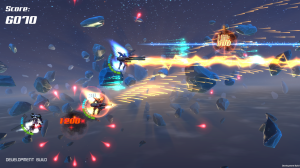 Stardust Galaxy Warrior take the elements of a shoot ‘em up, brawler and RPG, throws them in a bowls and creates an addictive fast and furious shooter with some deep customisation. Stardust Galaxy Warrior pays homage to it’s retro-gaming roots with the traditional side-scrolling camera, and looks great to play with mates. The game allows up to 4 friends to joint in the spaceship chaos on one screen, creating a true seamless co-op experience.