Top down racers have never really been associated with an extensive single-player experience; Micro Machines was one of the best multiple games of the 90’s, can anyone remember it having a good single player campaign? Mantis Burns Racing, by indie developer VooFoo Studios breaks the mould, bringing players an extensive and deeply customisable single-player campaign, so much so that it leaves the multiplayer aspect of the game in it’s rear-view mirror.

Mantis Burns Racing campaign is split into three tiers of difficulty, with each tier split into different sections offering a variety of races. Although there are no new racing modes on offer, the selection is diverse enough for it to not feel like your racing in the same modes over and over again. Completing the different races rewards you with money to buy new vechiles and parts to upgrade your current garage, which has a lot more freedom than you’d expect.

The deep customisation to your cars is one of the standout part in the single player experience. Each car has empty mod slots to which you can attach different performance enhancing mods. There is no restriction on how you build your car, just consequences. Throw a ton of gearbox mods in your car and you shoot of the line, however, when you come to your first corner it’ll be like driving on ice. The same goes for engine upgrades, a ton of them will give you blistering top speed, just getting off the start line could take you an age. With the limited number of mod slots to each vehicle you really have to choose wisely, bringing an almost RPG element to the game. You can increase your vechiles mods slots by levelling up the vechiles, which also brings a slight cosmetic overhaul to the car.

There are three car classes available – light, medium, heavy, all of which you’ll probably want to upgrade differently. As you’d expect the cars all handle differently; the light buggy is nippy and agile but not the quickest, where as the heavy truck is sluggish to handle but the’s no matching it’s top speed. The racing mechanics in Mantis Burns Racing are some of the best of recent time, feeling almost simulation like. The unforgiving gradient in the desert track combined with the variety of corners provides some challenging races, especially in the latter stages of the campaign. 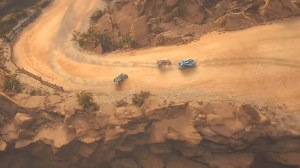 Racing through the different location my eyes would often drift from the car and focus on the beautifully polished environment; whether it be a rock formation, an endless pit or a built up metropolis, all looked finished to a very high detail. Which unfortunately brings more attention to the rough edged cars, which sometimes stand out like a sore thumb. It’s weird to think that that the cars weren’t giving as much attention as the environment but thats looks to be the case. 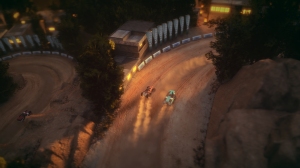 As previously mentioned the top down racing genre is often thought of as being a brilliant multiplayer experience, again Mantis Burns Racing breaks the mould here. Both local and online multiplayer are on offer, both with mixed results. The online multiplayer has very little rev in it’s engine. On several occasions I sat in a que not finding anyone to race, when I did it was no more than 2 other players. There is also no progressions system in the multiplayer, winning races has the same reward as losing races. In a time where so much replay-ability in racers comes from online play, this felt like a very backward step.

The one lifeline multiplayer does have is the weekly challenge. Each week a new challenge is available for players to compete in; how many cars can you overtake in a set number of laps, how many kilometres can you drive in 8 minutes, etc. The top ten drivers are displayed on a leaderboard on the home screen, offering some motivation to get your name displayed for the world to see. 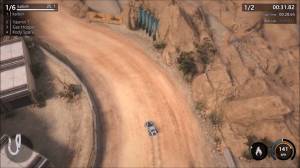 Mantis Burns Racing provides a compelling single player experience. With extensive RPG like car customisation, beautifully detailed racing environments and excellent racing physics you really will be saying ‘just one more race’. Unfortunately the lack of competition in the multiplayer offers little reason to return after racing through the engaging 10 hour campaign.